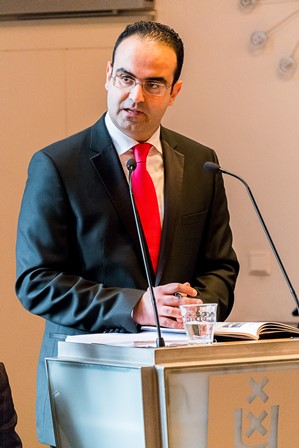 Michail Koutris, graduated from the Dental School of the National and Kapodistrian University of Athens, completed the MSc in Oral Kinesiology in 2007 at the Academic Center for Dentistry in Amsterdam (ACTA) and successfully defended his PhD thesis in 2013 at the University of Amsterdam (UvA). In the Netherlands, he holds a position as an assistant professor at the department of Oral Kinesiology at ACTA and works at the Hospital Dentistry clinic of the department of Oral and Maxillofacial Surgery of the Academic Medical Centre (AMC) in Amsterdam. In Greece, he is working as a freelance orofacial pain specialist and as a scientific collaborator of the Orofacial Pain clinic of the Dental School of the University of Athens. He was chair of the Research Committee of the European Academy of Craniomandibular Disorders (EACD) (2011-2015). He is currently the national representative of Greece at EACD and since 2015 he is the secretary/treasurer of the INFoRM group of the IADR. He is co-founder of the European Academy of Orofacial Pain and Dysfunction (EAOPD) and chair of the Scientific committee. He is a full member of the Society of Oral Physiology (Store Kro Club), the International Association for the Study of Pain (IASP), the Dutch Society for Gnathology and Prosthetic Dentistry (NVGPT), and the Greek Society of Orofacial Pain.